AK: What first attracted you to science fiction and fantasy? When did this happen? Which do you prefer? When did you begin writing?

JT: What first attracted me to science fiction and fantasy was the release of Star Wars when I was eight years old. Like many of my generation, I was thereby imprinted with science fiction and fantasy (for Star Wars was both) as being the pinnacle of coolness; its overriding set of metaphors to live by is an imperative so deeply ingrained by this point that it could not be leached out even by The Phantom Menace. 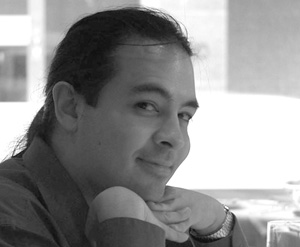 Do you write more science fiction or fantasy?
Fantasy, I guess. On the other hand, I've written one spaceship story, but no elf stories.

Does your Asian heritage play a role in your writing?
Yes: while I am engaged in the hard work of writing, my Asian heritage looks up words in the thesaurus for me, runs out to the store to keep me stocked in paper and toner cartridges, and does all my copy editing. And I don't have to pay it a cent!

We had a hard time finding Asian sci-fi writers. In your opinion, why aren't more Asians attracted to writing SF/fantasy?
Remember all those cool Asian characters in Star Wars?

I recently read an article about the portrayal of minorities in SF, and the lack of writers of colour who write SF. Do you have any thoughts on this subject?
Modern science fiction has its origins chiefly in the fantasies of geeky white boys. That is slowly changing to encompass geeky girls and geeky non-Whites and even — gasp! — the occasional non-geek. But things change slowly. Fortunately for me, as I am only half-Japanese, I am also half-geeky-White-boy.

Besides writing science fiction and fantasy, what else do you do?
I write for, and occasionally appear in, the barely educational comedy show History Bites on the History Television channel; I perform annually at the Ad Astra science-fiction convention; I edit a dull but valuable publication, the Canadian Directory to Foundations and Grants, for the Canadian Centre for Philanthropy; and I am the founder of the Serial Diners, a club that has for 12 years been visiting all the restaurants in Toronto's Yellow Pages in alphabetical order.

How many books have you written/published?
I have written one book, Jason Taniguchi's Very Sensible Stories and Poems for Grown Persons, published by Kelp Queen Press.

Some people don't take SF/fantasy writing seriously. Do you have any thoughts on this?
Who are these people? When I achieve godhood, I will turn them into elves and send them away on a spaceship, and THAT will show them how seriously they should have been taking this stuff, don't you think?

related links:
http://www.globalserve.net/~kasturi/jason_taniguchi.html
Jason Taniguchi writes for History Television's History Bites and performs an annual one-man show at the science-fiction convention Ad Astra. His book Jason Taniguchi's Very Sensible Stories and Poems for Grown Persons is published by Kelp Queen Press.
Alexis Kienlen was born in the year of the Fire Dragon. She is a poet, fiction writer and journalist. Originally from Saskatoon, she has lived in Montreal, Wainwright, Albert and Jakarta, Indonesia. She reads and writes as much as she can.
This article appears in the RicePaper Magazine Issue 8.1
Email ThisBlogThis!Share to TwitterShare to FacebookShare to Pinterest
Newer Post Older Post Home
Tweets by @acww