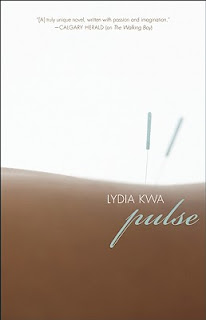 Pulse, the latest novel by Lydia Kwa, opens on a summer’s day in 2007 when Natalie receives a letter at home in Toronto. “The par avion envelope with its border of red and blue flags boasts three stamps, all bearing an insignia on the top right-hand corner: the dark figure of a lion’s head. Referring to the “Singa” in Singapore, city of lions.” She immediately recognizes the flourished script of Faridah and the emotional risk of the letter’s arrival. Natalie and Faridah were in love during adolescence, each involved now with other people and living in opposite corners of the world. Despite time and distance, the two have remained in contact though seldom mention their romantic past.

Reading the letter, Natalie learns that Selim, Faridah’s son, has committed suicide. The details are few – death by hanging, a family distraught – and the note concludes with Faridah’s wish for Natalie to return to Singapore for the memorial. However, Natalie and Selim are linked by more than their connection to Faridah. The two had bonded, unbeknownst to Faridah, before his suicide, over their mutual interest in Kinbaku and stayed in-touch after the initial disclosure of their separately practiced fetish. This sets in motion a story about shared history, its ability to bind and divide, and the devastating effects of silent suffering.

An acupuncturist with her own practice, Natalie is forty-eight years old and has lived with her parents in Canada since emigrating from Singapore in 1979. To all appearances she is an exemplary daughter but her placid façade belies a painful past. “Deep inside me is someone who has always resisted belonging to my parents. I may continue to live with them, do a few dutiful things, keep silence about the skeletons in our family closet, but there are truths about me I will never show my parents. That is the ultimate rebellion, I suppose.” This resistance is expressed, in part, through her enthusiasm for Kinbaku, Japanese rope bondage. The author’s treatment of this kink is without sensationalism, and yet the manner in which characters express their ideas about sex and relationships is occasionally hackneyed: “Haven’t you ever wanted to see what it’s like to be the one bound? Not knowing what to expect next. I know you’re not into pain, but what about surrendering control?”

Sexuality is a constant current in Kwa’s novels. This Place Called Absence (2000), her first novel, contains thematic similarities to Pulse. The Walking Boy (2005) details the journey of a monk’s hermaphroditic disciple during China’s Tang Dynasty and was embroidered with motifs of desire and secrecy. In Pulse, Kwa tells the decade-spanning accounts of four women in Canada and Singapore as they struggle with incest, suicide, familial ties, and queer relationships. The story alternates between past and present, providing scenes of Natalie’s youth which explain her current unrest. Although she experiences abuse and family turmoil at home, her early life is not without moments of levity. She and Faridah are thirteen years-old when they meet in 1972, at Tanjong Katong Girls’ School, and quickly become friends. Their days pass by filled with idle chatter and a mutual affection begins to blossom.

Cosmic Pulse, the medicinal herb business owned by Natalie’s family, also looms large in her childhood memories. Traditional Chinese medicine and fortune telling play a role in her upbringing; as an extension of this background and her own professional knowledge, Natalie habitually refers to acupressure points throughout the narrative. Kwa’s writing slips evenly through these periods, allowing the reader to see the development of the girls’ relationship and the disturbed nature of Natalie’s home life. The author provides bits of regional history and information on the socio-political climate of Singapore during the mid-twentieth century but these do not bring as much life to the story as her tangible descriptions of the city’s ambiance. When describing places or even food, Iwa’s words are stronger and more convincing than they are in passages of dialogue or lustful ponderings.

When Natalie arrives back in Singapore for Selim’s memorial, she is “aware of traces of the familiar, along with their disappearance.” The city of her youth is gone but she can still recognize the remnants of its existence. Faridah reveals to Natalie that she had previously told Selim of their relationship, attempting to show her gay son that she understood him. This is emotionally charged territory for all parties involved, Natalie and Faridah are forced to face what has haunted them for years. What could have happened if tragedy had not severed their teenage liaison? How different would their lives be? Selim had been fascinated by the violent episode that separated his mother and Natalie. Abusive interpersonal dynamics and patterns of domestic violence mimic themselves across time. The price of freedom sometimes costs more than the emotional resources these individuals can afford. Unrest over missed opportunities and helpless circumstances permeates Pulse: the bitterness is clear but never engulfing.

Kwa, who was born in Singapore and now lives in Vancouver, writes in streams of laconic sentences that communicate her characters’ milieus. Her treatment of universal ideas like yearning, lust, chance, memory and new beginnings is sensitive but sporadically hampered by twee observations and expressions. She is at her best when showing the reader her story through sensory details. The volume’s subtle conclusion is appropriate to its narrative tone and further mention is to give it away. Pulse is an entertaining, plot-driven tale that offers more than the kinks of its characters. It is a story about love and resolution, about friendship and family, and the far reaching effects of tragedy.