The Asian Canadian Studies Program at the University of Toronto Presents: Lock Pictures: A book project in development 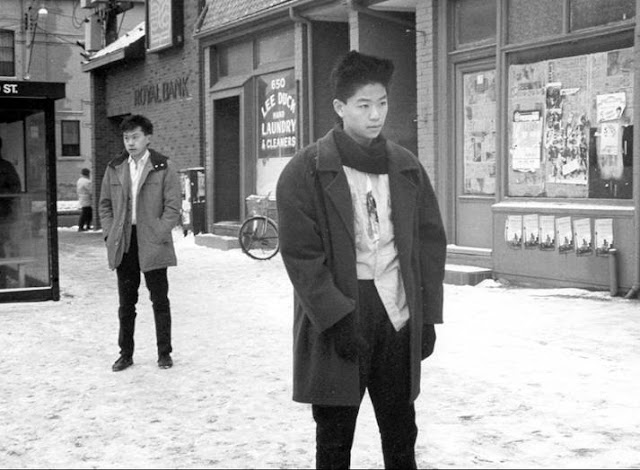 In 1969, Keith Lock's student film Flights of Frenzy won the Best Super 8 prize at the UNESCO 10th Muse International, Amsterdam, inaugurating one of Canadian cinema's most distinctive careers. Not only is Keith Lock Canada's first Chinese Canadian filmmaker and director of the first feature film by an Asian Canadian, he worked as Claude Jutra's assistant, he was Michael Snow's cinematographer on several projects, and he was a founding member and the first Chair of the Toronto Filmmaker's Coop.
Presenters will contextualize Keith Lock's work and career, and discuss the proposed book project. Keith Lock will introduce and show clips from his five decades of production.


April 24th, 2013 (Wednesday) | 2 - 4 PM
OISE University of Toronto, room 12-274 (12th floor)
252 Bloor Street West | St. George subway stop.
This event is free, and everyone is welcome to attend.
To RSVP, and for more information about the ACS Works in Progress Series,
contact Ken Huynh at kenneth.huynh@utoronto.ca.

ELAINE CHANG received her BA in English from the University of British Columbia and her MA and PhD in Modern Thought and Literature from Stanford University, and is an alumna of the Canadian Film Centre's Screenwriting Lab. Her publications include Reel Asian: Asian Canada on Screen (Coach House Press, 2007; editor and contributor), Decentre: Concerning Artist-Run Culture (YYZ Books, 2008; co-editor and contributor), and the postcolonial literature and theory section of the Blackwell Companion to English Literature (forthcoming 2013). She has earned awards and grants from the Mellon Foundation, SSHRC, the Center for Cultural Analysis, the Canada Council for the Arts, the Nantucket Film Festival, Telefilm Canada-Writer's First, and the Ontario Arts Council. She has also received the University of Guelph Central Student Association's Teaching Excellence Award, and has served as chairs of the Modern Language Association's Committee on the Literatures of People of Color in the US and Canada and the Executive Committee of the Division on Women's Studies in Language and Literature. She teaches at the University of Guelph.

RICHARD FUNG is a video artist and writer whose work deals with the intersection of race and queer sexuality, and with issues of post-colonialism, diaspora, and family. His award-winning videos, which includeMy Mother's Place (1990), Sea in the Blood (2000) and Dal Puri Diaspora (2012), are screened and collected internationally, and his essays, including the much anthologized 'Looking for My Penis: The Eroticized Asian in Gay Video Porn,' have been widely published. Richard is the co-author, with Monika Kin Gagnon, of 13: Conversations on Art and Cultural Race Politics (2002). A recipient of numerous grants and awards, including the Bell Canada Award for Video Art in 2000, Fung teaches at OCAD University in Toronto.

KEITH LOCK was born in Toronto and holds an M.F.A. degree in film from York University. Keith worked as Claude Jutra's assistant as well as Michael Snow's cinematographer on a number of works. His student film, Flights of Frenzy, won the Best Super 8 Award at the UNESCO 10th Muse International, Amsterdam, 1969. Credited by Cinemaya as one of the first Chinese Canadian Filmmakers, he was a founding member and first chair of the Toronto Filmmaker's Co-op, which later morphed into LIFT. Lock has presented three films at the Toronto International Film Festival including: the experimental film, Everything Everywhere Again Alive, (1975), which was presented in TIFF's Retrospective of Canadian Cinema in 1984, and the dramatic feature, Small Pleasures (1993). His half-hour film, A Brighter Moon (please see attached image), received a Gemini Award Nomination for Best Short Drama in 1987. Keith was the first recipient of the Chinese Canadian National Council's Media Applause Award in 1998. His television documentary, The Road Chosen: The Lem Wong Story, received the NFB Innoversity Conference Award, 2002 and his short film, The Dreaming House (2005), received the Best GTA Filmmaker Award at the Toronto Reel Asian International Film Festival. Keith's short, Magical Coincidence, was the winner of the 'So You Think You Can Pitch' competition at the Toronto Reel Asian International Film Festival, 2011
Email ThisBlogThis!Share to TwitterShare to FacebookShare to Pinterest
Newer Post Older Post Home
Tweets by @acww