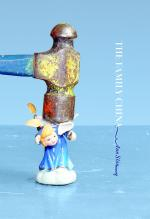 The Asian Canadian Writers' Workshop is proud to host Ann Shin's book launch of The Family China as part of literASIAN 2013, Nov 21-24.   The Family China is a book of poems about the sense of belonging, about the tenuous ties we make across borders both international and internal.
The Family China, her Ann's second book of poems, examines the decentering experiences of migration, loss and death, and the impulse to build anew. In five suites threaded through with footnote-like fragments that haunt and ambush the text like memories, the book accrues associations, building and transforming images from poem to poem, creating a layered and cohesive collection that asks daring questions about how we define ourselves.

These poems grapple rawly and musically with the profound messiness of human relations; their candour consoles and instructs. The quandaries in The Family China are deeply recognizable. Strung up between fragility and resilience, between naïve hope and domestic disillusionment, between an untenable nostalgia for the pastoral and a deep unease with the global, the voice of these poems is nevertheless determined to find some scrap of a song we can sing in common.

"... This short, dazzling collection of poems contains a universe—nothing short of North American life in the late twentieth and early twenty-first century. Somehow it is all here, joyously offered up, birth, death, and everything in between, including the suspect investment schemes of the heart (and the bank), the modern war in relationships and families, the dark-light, pastoral dream of childhood, the carried-over costs of immigration and exile..." - Karen Connelly

“Ann Shin x-rays the ecstasy and the elegiac of the everyday… [her] poems are ravenous and nourishing.” —George Elliott Clarke

Poets in Profile: Ann Shin at Open Book: Toronto
Licking Stamps: The Ann Shin Edition at Open Book: Toronto
Poem excerpt: Ann Shin, The Family China
Smashed: poetry and the family china - interview on The Sunday Edition of Ann Shin by Michael Enright, June 16, 2013 - scroll down to "Treehouses, Donna Neufeld becomes a doctor at 48 and Canada: Whose history is it?"