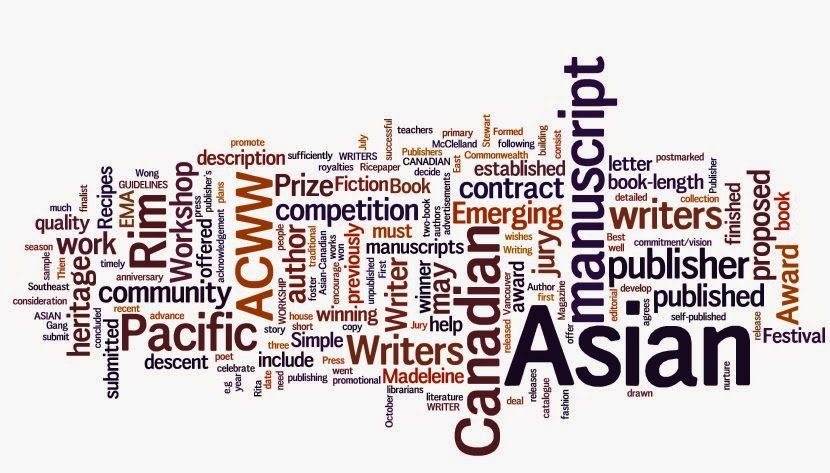 The ACWW Emerging Writer Award (EWA) was established in 1999 to help authors of Pacific Rim Asian heritage be published with an established publishing house. The winner of the first award was poet, Rita Wong (Monkeypuzzle, published by Press Gang.) Madeleine Thien won the second award in 2001 for her short story collection, Simple Recipes. This manuscript impressed McClelland & Stewart so much that they offered Madeleine a two-book deal. Simple Recipes went on to win the Ethel Wilson Fiction Prize, the City of Vancouver Book Prize, and was a finalist in the Commonwealth Writers Prize for Best First Book.

The ACWW Emerging Writer Award is a community building initiative of the Asian Canadian Writers’ Workshop to encourage the development of quality manuscripts and finished works by new writers in our community.

The 2015 competition is for a book-length manuscript of fiction by a Asian-Canadian writer of Pacific Rim Asian heritage who has not previously published a book-length work of fiction in traditional or digital form.

The Author
The author must be a Canadian of Pacific Rim Asian heritage (e.g. East Asian or Southeast Asian descent) and not previously self-published or traditionally published a book-length work of fiction. After a manuscript is submitted to the EWA competition, the author agrees not to submit the work to any publishers until after the manuscript has been released from the EWA competition in October 2015. Receipt and release of the manuscript will be acknowledged in a timely fashion.

The Jury
This year’s jury members are Carellin Brooks, Glenn Deer, and Karen Shigeno. If there is no work of sufficiently high quality, the jury may decide that there is no winner.

The Publisher
Publishers will be offered the winning manuscript for consideration. If a publisher wishes to offer a contract to the winning author, a detailed letter of intent will be submitted to the ACWW.   The letter should include the following:

The publisher will include acknowledgement of the Asian Canadian Writers’ Workshop Emerging Writer Award in the finished book as well as on press releases and advertisements. Should a successful contract be concluded, the ACWW will help promote the book.

Deadline for manuscripts: must be postmarked by July 31, 2015.

1) Completed application form (download for attachment).
2) $25.00 registration fee that also entitles the entrant to a year’s subscription to Ricepaper Magazine as well as membership in ACWW.  Cheque written out to: Asian Canadian Writers' Workshop Society.
3) three print copies of the manuscript in addition to a digital copy to be sent to: director@asiancanadianwriters.ca

Announcement of Winner
The winner will be announced at during the 2015 literASIAN: A Festival of Pacific Rim Asian Canadian Writing Festival Oct 8 – 11, 2015.