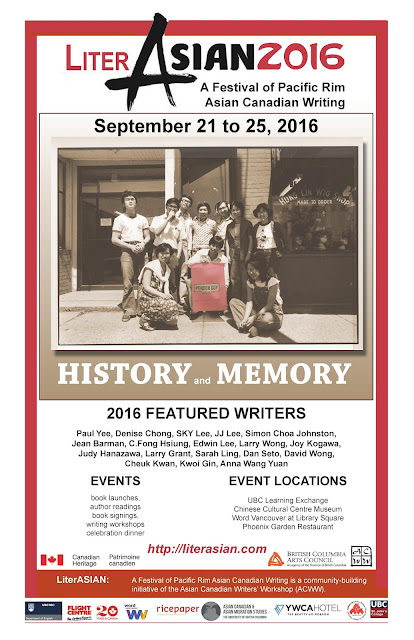 Our Theme – History and Memory
As Canada nears its 150 celebration of Confederation, it is timely for the Asian Canadian community to gather to reflect on its history.

Festival Pass
This year we are launching a festival pass. This $20 festival pass will allow the purchaser unlimited access to all five of our workshops and three panels as well as an annual membership to ACWW which includes subscription to the online version of Ricepaper magazine and discounts to some community partnership events. A good deal plus a great way to show your support to the Asian Canadian writing community.

Our opening event will be hosted jointly by the Vancouver Public Library on Wednesday, Sept 21, 6pm at the Central Branch lower level, Alice MacKay Room. The panel will explore the different ways we chose to gather and record the past and illuminate the deeds of earlier generations. The panel will include Award-winning authors and editors, Paul Yee, Denise Chong, SKY Lee, JJ Lee, Simon Choa Johnston, Jean Barman and Judy Hanazawa.

Aside from the opening event panel at VPL, we have a Friday evening 6pm panel “Crossing Boundaries: Writing the Diaspora” at the Chinese Cultural Centre Museum (555 Columbia Street). The panel will look at History and Memory from the perspective of diasporic writing when our writers situate their stories beyond Canadian shores. Panelists, Simon Choa Johnston’s new publication, The House of Two Wives begin his story in Calcutta by way of Bagdad and eventually end up in Hong Kong. C. Fong Hsiung traces the plight of the Hakka community following the India-China war of 1962, the Chinese Indians (the Hakka), fearing suspicion and hostility, begin to emigrate. Fong Hsiung’s main character, Jillian Wu was sent to Canada as a picture bride to marry a man she had never met. Filmmaker and director, Cheuk Kwan and cinematographer, Kwoi Jin are partners in a 15 part documentary series “Chinese Restaurants” that tells the stories of the diasporic Chinese from such places such as Argentina, Brazil, Cuba, India, Israel, Madagascar, Mauritius , Norway, Peru, South Africa, Trinidad, Turkey and Canada. They will discuss their new book project to further elaborate on what didn’t ‘make it” into the film. Anna Wang Yuan is a Canadian novelist currently living in California. She edited an anthology “The Strangers” a short story collection by nine new generation ethnic Chinese writers, mostly immigrants who reflect the alienation of being a stranger in a strange land.

The written word is not the only way we can communicate our idea. This panel brings together storytellers, filmmakers and those who use other creative means to create effective content. Sarah Ling is a part of a team of producers, writers and filmmakers that are based in U.B.C. and together with elder Larry grant has chronicled Larry dual native aboriginal/Chinese heritage on film. Dan Seto uses youtube as a vehicle for his “Chinese Canadian Roots TV” to explore and chronicling his roots through cooking, culture, travel, history and events. 1985 to 1987, Paul Yee served as Chairman of the Saltwater City Exhibition Committee of the Chinese Cultural Centre and along with David Wong, help put together this seminal Exhibition about the Chinese in Vancouver. David Wong also published an acclaimed graphic novel,”Escape from Gold Mountain”. Filmmaker and director, Cheuk Kwan and cinematographer, Kwoi Jin are partners in a 15 part documentary series “Chinese Restaurants” that tells the stories of the diasporic Chinese from such places such as Argentina, Brazil, Cuba, India, Israel, Madagascar, Mauritius , Norway, Peru, South Africa, Trinidad, Turkey and Canada.  This is a multi-media panel where each panelist will showcase some of their activities and discuss the creative process behind work.

Joy Kogawa’s new memoir, “Gently to Nagasaki” is presented in partnership with the Historic Joy Kogawa House, the Vancouver Public Library, and Caitlin Press. This intimate exploration, both communal and intensely personal, invites you on a spiritual pilgrimage of forgiveness and resilience. Set in Vancouver and Toronto, the outposts of Slocan and Coaldale, the streets of Nagasaki and the high mountains of Shikoku, Japan, it is also an account of a remarkable life.

Following the India-China war of 1962, the Chinese Indians (the Hakka), fearing suspicion and hostility, begin to emigrate. In Picture Bride, set during a period of changing times and changing values, twenty-year-old Jillian Wu leaves Calcutta to marry a man she has never met—Peter Chou, also a Hakka—with much anticipation, only to discover that he is gay. Forced by her husband to keep up the charade of a “normal” marriage, and pressured by her in-laws to have a child, she flees back to Calcutta, only to be disowned by her conservative family. A moving story with political overtones, Picture Bride confronts the politics of family, culture, and women's rights.

What kind of images does “Chinese” stir up in your mind? Do you think of strange-looking workers who built the railroads before 1900? Or the quiet math genius from your high school whose strange-sounding name you’ve long forgotten? Perhaps you recall the mysterious man who brought bags of cash to pay for a car or even a house. In a time of globalization, you’ve learned to work with strangers and live amongst strangers, yet you’ve probably only read books written by familiar names. Anna Wang Yuan compiled the nine stories and written the foreword.

Come and say Hello at the Ricepaper Magazine/literasian table

Come join in to share a meal that includes a 10-course Peking Duck dinner and have a chance to meet and talk to and get your books signed by the featured writers, in our 2016 program. Our Gala dinner is a fun-filled event which includes celebrity MCs and music from our literASIAN house band with lots of prizes and of course, a ten course Chinese meal.

The $50 ticket also offers a one-year membership to the ACWW as well as a one-year subscription to Ricepaper Magazine (online version) and discounts and special opportunities to community partner events. So come and support the creation of new writers and readers in our community and celebrate the end of another successful festival.
Email ThisBlogThis!Share to TwitterShare to FacebookShare to Pinterest
Newer Post Older Post Home
Tweets by @acww