Kim Thúy Talks About Her Novel "Vi" at the University of Toronto, May 7 as part of Asian Heritage Month 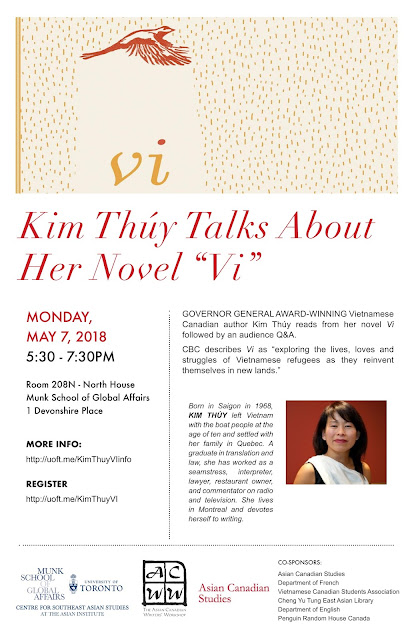 The youngest of four children and the only girl, Vi was given a name that meant "precious, tiny
one," destined to be cosseted and protected, the family's little treasure.  Daughter of an enterprising mother and a wealthy, spoiled father who never had to grow up, the Vietnam War destroys the life they've known. Vi, along with her mother and brothers, manages to escape-- but her father stays behind, leaving a painful void as the rest of the family must make a new life for themselves in Canada.

While her family puts down roots, life has different plans for Vi. As a young woman, she finds the
world opening up to her. Taken under the wing of Hà, a worldly family friend, and her diplomat
lover, Vi tests personal boundaries and crosses international ones, letting the winds of life buffet
her. From Saigon to Montreal, from Suzhou to Boston to the fall of the Berlin Wall, she is witness to
the immensity of the world, the intricate fabric of humanity, the complexity of love, the infinite
possibilities before her. Ever the quiet observer, somehow she must find a way to finally take her
place in the world.

Born in Saigon in 1968, Kim Thúy left Vietnam with the boat people at the age of ten and settled
with her family in Quebec. A graduate in translation and law, she has worked as a seamstress,
interpreter, lawyer, restaurant owner, and commentator on radio and television. She lives in
Montreal and devotes herself to writing.

Sheila Fischman is the award-winning translator of some 150 contemporary novels from Quebec.
In 2008 she was awarded the Molson Prize in the Arts. She is a Member of the Order of Canada and
a chevalier of the Ordre national du Québec. She lives in Montreal.Praise for Vi and Kim Thúy.
"A voyage into the Vietnamese soul, a story of rupture and a long rebirth of the self, Vi is a novel that is at once astonishing and energizing, one that pays magnificent homage to the quiet power of women"—ELLE France

"Kim Thúy is one of the most interesting new voices in Canadian literature." —CBC Books