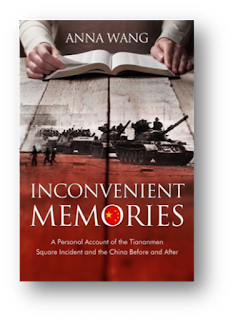 Immigrant and survivor Anna Wang offers a unique glimpse into the Tiananmen Square Incident and the China surrounding it in her powerful new book Inconvenient Memories: A Personal Account of the Tiananmen Square Incident and the China Before and After.  From her childhood account of living in an oppressed government system, to the activities during her college-age years that led to the protests in the Square and beyond, Wang’s revealing personal account is both gripping and terrifying. It’s a story that will never be allowed to be told in her home country.

“When the protests started, I was sent to the square on a daily basis to take photos for my Japanese boss to analyze for evidence of turning tides in the economy,” says Wang, who worked for Canon. “That’s why after almost thirty years I can still recall the details graphically.”

Having experienced students’ protests while studying at Peking University, Wang naturally felt for the cause of the students. However, as an employee of a foreign enterprise, she observed the protests with mixed feelings.

“I felt sympathy for the students’ fight for democracy and freedom, but when I crossed the Tiananmen Square, hearing them sing “The Internationale will be the human race,” I became wary of them. What if the students succeeded and they took everything I owned and would own in the future? As the very few who worked for foreign enterprises at the time, I cared about the market economy, private property, and anything like that.”

Then the massacre occurred and Wang lived through the terrifying time when tanks were in the streets and people were dying. Every relationship around her was challenged.