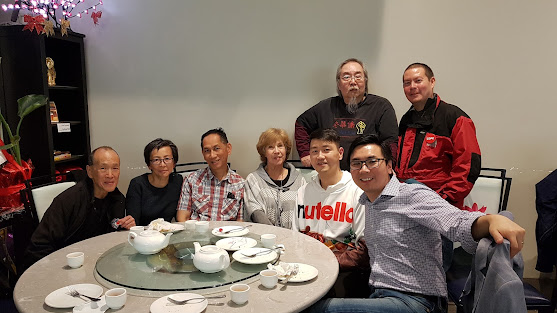 (Dinner at Jade Dynasty in 2018. From left to right: Sean Gunn, Fanna Yee, Elwin Xie, Marlene Enns, Eric Li, Sid Tan, Jordan Tan, Allan Cho)
ACWW and the community are mourning the loss of our friend, Sid Tan.  Sid was renowned for his activism in highlighting awareness of the injustices of the Chinese Canadian head tax and as a community organizer for a number of non-government organizations. As a paper son and descendant of head-tax payers, Sid dedicated his life to redress. Tan was the Chairman of the Chinese Canadian National Council and the founding director and co-chairperson of the Head Tax Families Society of Canada. Sid was the founding director and President of the Association of Chinese Canadians for Equality and Solidarity Society and a founding director of the CMES Community Media Education Society and Asian Canadian Writers' Workshop. He was a community activist concerned with environmental and human rights and social justice issues and had produced and crewed hundreds of hours of community television programming, much of the national and international award-winning.  He was active in ICTV, an Independent Community Television Co-operative in Vancouver.  Until his passing, Sid was the voice of ACWW’s Facebook social media page.
Sid’s lifelong friend, Jim Wong-Chu, dedicated a poem in his book Chinatown Ghosts to Sid.

we glide the flamenco air

we danced a pair of common fish

stewing in the back room heat

I am a miner of the mountain of gambler’s gold

between bowls of borrowed rice

I toss the dice of low life

numb to the feel of each burning tile

its clatter a swirling tatter of dancing steps

as surely as lord buddha sits on my right

make it all or nothing