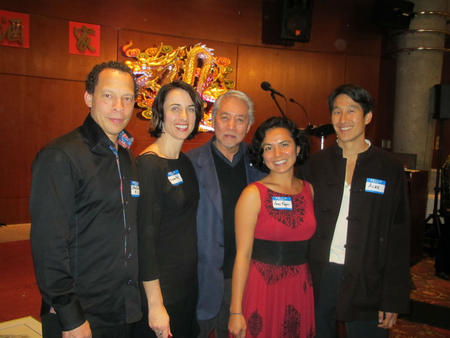 The celebration of Wayson Choy and his novel “Jade Peony” was the cause for many of Vancouver’s literary luminaries to come together in Vancouver Chinatown’s Floata Restaurant on Sunday evening, October 14th. The event was presented by Asian Canadian Writers’ Workshop, Gung Haggis Fat Choy, Historic Joy Kogawa House Society, and Vancouver Asian Heritage Month Society.

Project Bookmarks Canada founder Miranda Hill finally brought her project to the West Coast, after setting up 10 Bookmarks in Ontario. Anna Ling Kaye had assisted Miranda in scouting the site, along with other aspects of the project. When the site was finally confirmed by City of Vancouver, Anna brought the latest details to Asian Canadian Writers’ Workshop, where she is the current president. Immediately ACWW co-founder Jim Wong-Chu and vice-president Todd Wong agreed to organize a dinner, along with new board member Winnie Cheung. In four weeks time, 170 people gathered from many corners of Vancouver’s literary communities to celebrate.

The Georgia Straight wrote up both a preview story and posted pictures of the event.

A total of 15 speakers graced the stage to share intimate stories of growing up as childhood friends of Wayson such as Garson, to fellow students during his time as the first Asian-Canadian in the UBC Creative Writing MA program. As well, industry representatives and community leaders also spoke including author/editor/community organizer Jim Wong-Chu, Vancouver Public Library Chief Librarian Sandra Singh, and BC Bookworld publisher and author Alan Twigg. The evening was co-hosted by CBC Radio One broadcaster Sheryl Mackay who also hosts the CBC Radio One Bookclub, and Todd Wong creator of Gung Haggis Fat Choy, as well as president of Historic Joy Kogawa House and vice-president of Asian Canadian Writers’ Workshop – some of the events’ presenting organizations.

Sid Tan of W2 Media filmed much of the evening along with sound technician Elwin Xie. Both have worked with event organizers Jim Wong-Chu and Todd Wong for many . It was the conclusion of the Wayson Choy Special Tribute Evening
Email ThisBlogThis!Share to TwitterShare to FacebookShare to Pinterest
Newer Post Older Post Home