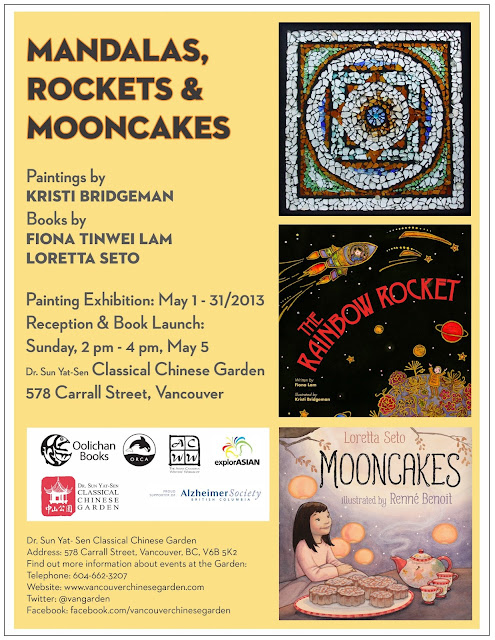 Please join us for the the launch, reading and signing of two gorgeously illustrated children's picture books celebrating family bonds and Chinese festivals.   In collaboration between the Vancouver Asian Heritage Month Society and the Asian Canadian Writers' Workshop, this event will be taking place at the Sun Yat-sen Classical Chinese Garden as part of explorASIAN 2013. The Rainbow Rocket celebrates the strong bond between a child and a grandparent, as well as a child's creativity and courage in the face of a loved one's struggle with Alzheimer's disease.

Mooncakes is the lyrical story of a young girl who shares a special celebration of the Chinese Moon Festival with her parents, who tell her ancient tales about Chang-E, the woman who lives on the moon; Wu-Gang, the woodcutter; and Jade Rabbit.

This event is held in conjunction with a solo exhibit of eastern inspired contemporary Mandalas and new children's book illustrations by artist Kristi Bridgeman, illustrator of The Rainbow Rocket.  Reception, reading, signing and reception 2:00 p.m. Sunday May 5th, Dr. Sun Yat-Sen Memorial Gardens, 578 Carrall Street, Vancouver.
Fiona Tinwei Lam is the author of two books of poetry, Intimate Distances and Enter the Chrysanthemum. Her prose and poetry have appeared in over twenty anthologies. She is one of the co-editors of Double Lives: Writing and Motherhood , as well as the editor of The Bright Well, a collection of contemporary Canadian poems about facing cancer. www.fionalam.net
Loretta Seto is a fiction and screenwriter, as well as playwright, who has been published in RicePaper magazine and the anthology Strike the Wok. Her story from that anthology, titled "Versus," was selected for production and broadcast on CBC Radio as part of the program Between the Covers. She has also had two short films "Once a Fish" and "Ripples" produced with funding from CityTV. She wrote and produced a solo performance piece "Why Weight?" for the 2011 Vancouver International Fringe Festival, and a second production of the play was also included in the Brink Festival 2012. Her first children's book Mooncakes was released in the spring of 2013 by Orca Book Publishers.  www.lorettaseto.com.

"A touching and beautiful story of love, loss and imagination, told with sensitivity and grace." ~Dennis Foon

"The themes of love, memory, loss and renewal are sensitively rendered in this poignant story and will resonate with readers of all ages."
~Judy Fong Bates

The Rainbow Rocket by Fiona Tinwei Lam (Oolichan Books) and Mooncakes by Loretta Seto (Orca Books).  The author of The Rainbow Rocket is donating her proceeds to The Alzheimer's Society of BC, which has endorsed the book.