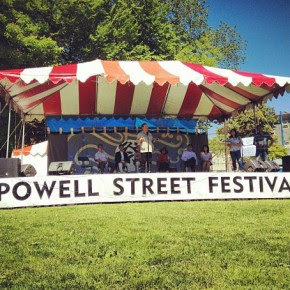 Come hang out with us at the Ricepaper booth this weekend Saturday August 2 and Sunday August 3, 2014 at the 38th Annual Powell Street Festival. The festival has moved to 500 Alexander Block and it's gonna be a lot of fun! We have a booth where you can buy some awesome subscriptions, magazines and participate in fun activities!

Register to compete at the Ricepaper booth on Saturday or Sunday

Before the wave of “New Narrative” swept the west coast with its confessional-styled prose, the Shishosetsu (also known as Watakushi Shosetsu or I-novel) emerged in the early part of the 20th century in Japan . The genre is distinguished by self-revealing narrative with the author as the central character, allowing for the author to enter their narrative on an intimate level. The reader may then question the boundary between fiction and non-fiction.

For this year’s Powell Street Festival, three authors were selected to interpret the shishosetsu in their own way, while considering the theme of this year’s festival: roots. The authors are Sally Ito (Manitoba), Lydia Kwa (British Columbia), and Marie Mutsuki Mockett (New York). Each author has written a piece exclusively for the Powell Street Festival, which we have then adapted into the chapbook available at the Festival. Excerpts from these chapbooks will be featured inRicepaper magazine, and there will be a reading in a salon-style gathering, with a post-reading Q & A session.

Limited edition chapbooks edited by Leanne Dunic with writings by Sally Ito, Lydia Kwa, and Marie Mutsuki Mockett will be available for sale at the Powell Street Festival Sales booth or at the Literary reading on Sunday August 3rd, 1:30-2:15pm, Firehall Arts Centre.

Leanne Dunic is a multi-disciplinary artist and a writer of music, poetry, fiction, and creative non-fiction. She is a graduate of SFU’s The Writer’s Studio, where she focused on poetry and lyric prose. In her previous lives, Leanne owned businesses in the music and fashion industries. She is currently a mentor at SFU’s Southbank Writers’ Program, and the singer/guitarist of the band Luck Commander.