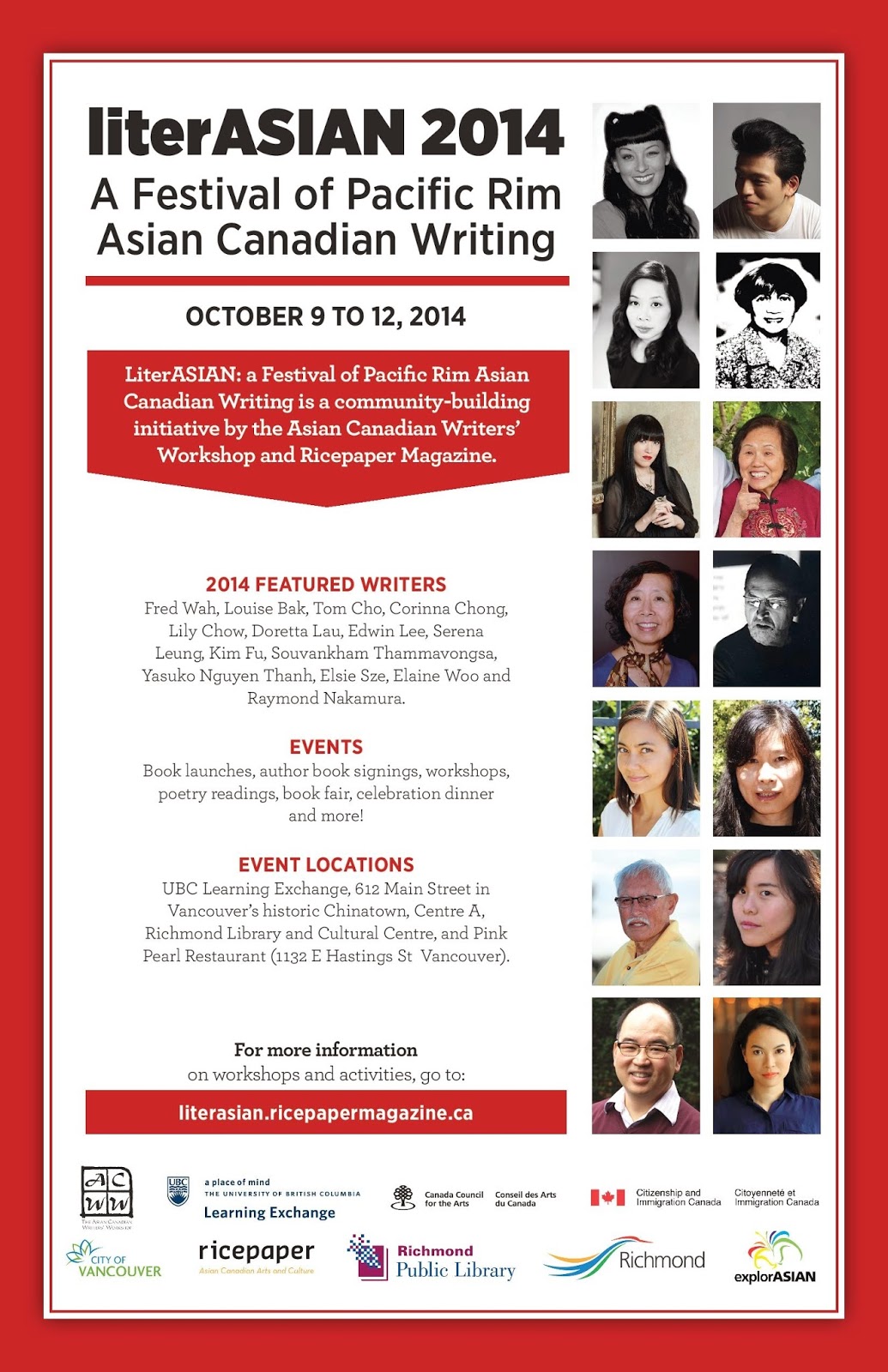 The Vancouver Asian Writers’ Workshop (ACWW) is pleased to announce the countdown to its much anticipated celebration of Pacific Rim Asian Canadian writing set for October 9th to 12th, 2014 in Vancouver, BC. As a non-profit organization with a mandate to promote awareness of Asian Canadian literature, history, and culture, ACWW provide a supportive and culturally sensitive environment for members from a common Pacific Rim Asian Canadian heritage. ACWW also is the publisher of Ricepaper Magazine.

The main venue for the festival is the UBC Learning Exchange situated in the middle of Vancouver’s historical Chinatown at 612 Main Street. The UBC Learning Exchange is a community engagement initiative that brings together a wide variety of people, and facilitates connections in the Downtown Eastside between local residents, organizations and the UBC Community.  Authors featured at this festival include:


Fred Wah was born in Swift Current, Saskatchewan in 1939 but grew up in the Kootenays in southeast British Columbia. He has published widely since the early 1960s and frequently presents internationally on Canadian poetry and poetics. Recent books are Diamond Grill, a biofiction about growing up in a small town Chinese-Canadian cafe (1996), Faking It: Poetics and Hybridity, a collection of essays (2000), both from NeWest Press, and two collections of poetry, Sentenced to Light (2008) and is a door (2009). He is a former Parliamentary Poet Laureate and an Officer of the Order of Canada.

Louise Bak is the author of Syzygy (DC Books), Tulpa and Ginko Kitchen (Coach House Books). She's the co-host of Sex City, Toronto’s onloy radio show focused on intersections between sexuality and culture. Her performance work has appeared in varying video contexts, including Cheese, Partial Selves and Crimes of the Heart. She co-wrote the feature film project, The Ache with Keith Lock, involving aspects of Chinese folklore and fetishism. She also curates/hosts a salon series called The Box, which encourages communication across literary and artistic borders.

Tom Cho is an artist with over 70 fiction pieces published in journals and anthologies. His collection of fictions, Look Who's Morphing, was originally published to acclaim in Australia and was shortlisted for multiple awards, including the 2010 Commonwealth Writers' Prize for Best First Book. This year, it was released by Arsenal Pulp Press for North America and Europe.

Corinna Chong holds an MA in English and Creative Writing from the University of New Brunswick. Her writing has appeared in Echolocation, Grain, The Malahat Review, and Ricepaper, and her first novel, Belinda’s Rings, was published by NeWest Press in 2013. She lives in Kelowna, where she teaches English literature at Okanagan College and co-edits Ryga: A Journal of Provocations.

Doretta Lau is a journalist who covers arts and culture for Artforum International, South China Morning Post, The Wall Street Journal Asia, and LEAP. She completed an MFA in Writing at Columbia University. Her fiction and poetry have appeared in Day One, Event, Grain Magazine, Prairie Fire, PRISM International, Ricepaper, sub-TERRAIN, and Zen Monster. She splits her time between Vancouver and Hong Kong, where she is at work on a novel and a screenplay. In 2013, she was a finalist for the Writers’ Trust of Canada / McClelland & Stewart Journey Prize. How Does a Single Blade of Grass Thank the Sun? (Nightwood Editions, 2014) is her debut short story collection.
Serena Leung graduated from the University of Western Ontario. Recently retired, she began to churn some of her manuscripts into books. She had written two novels: Fugitives at the Mouth of Pearl River (2010) and Rainbow over Gold Mountain (2012)

Edwin Lee is a second generation Chinese Canadian, born in Vancouver, B.C. before World War II. After retiring 15 years ago from the banking industry, he realized the importance of sharing the many “untold stories” relating to his family and childhood friends, living in Vancouver’s Chinatown. At the age of 78 years he self-published a book called “SUM YUNG GUYS”.

Kim Fu is the author of the novel FOR TODAY I AM A BOY (HarperCollins, 2014), a New York Times Book Review Editors’ Choice and Barnes & Noble Discover Great New Writers selection, shortlisted for the Canadian Authors Association Emerging Artist Award and longlisted for the Flaherty-Dunnan First Novel Prize. Fu has written for NPR, Maisonneuve, the National Post, the Rumpus, the Tyee, the Stranger, Prairie Fire, Grain, Room, and the New Quarterly, among others, and her work has been included in Best Canadian Essays. She is the news columns editor for This, a magazine of progressive Canadian politics now in its 48th year, and a freelance manuscript editor, with clients who went on to secure traditional publishing deals. Fu is a graduate of the University of British Columbia’s MFA in Creative Writing. She lives in Seattle.

Souvankham Thammavongsa was born in a Lao refugee camp in Nong Khai, Thailand in 1978. She was raised and educated in Toronto. She is the author of three poetry collections, most recently, Light, won the 2014 Trillium Book Award for Poetry. Her first book, Small Arguments, won the 2004 ReLit prize for poetry, and her second book, Found, was made into a short film by Paramita Nath and screened at film festivals worldwide, including TIFF, L.A. Shorts Fest, and Dok Leipzig.

Yasuko Nguyen Thanh's short story collection, Floating Like the Dead (McClelland &Stewart 2012), which includes the Journey Prize-winning title story, was on Quill & Quire's list of best books of 2012.The National Post wrote that "Yasuko Thanh impresses above all with the thematic complexity of her approach." Floating Like the Dead was longlisted for the Frank O'Connor International Short Story Award, shortlisted for the Danuta Gleed Award and the BC Book Prize, and a selection won the Arthur Ellis Award for Best Crime Short Story. She was named one of ten CBC Books' writers to watch in 2013. Thanh completed a Bachelor of Arts as well as a Masters of Fine Arts from the University of Victoria.

Elsie Sze is the author of three published novels, Hui Gui: a Chinese story (2005), The Heart of the Buddha (2009), and most recently, Ghost Cave: a novel of Sarawak (2014). Sze left her native Hong Kong at the age of 22 to pursue graduate studies in Toronto and later Chicago. She was a high school teacher and librarian before retiring from her position as librarian with the Toronto Public Library in 2001 to devote time to writing. In 2013, Sze won the inaugural Saphira Prize, a literary prize offered by Women in Publishing Society, Hong Kong for her manuscript "Ghost Cave". Ghost Cave: a novel of Sarawak was published and launched in Hong Kong in March, 2014.

Elaine Woo is the author of the poetry collection, Cycling with the Dragon. A graduate of the University of British Columbia's creative writing program, she has conducted writing workshops in community settings and homeless shelters in the DTES, the West End, and North Vancouver. She is the recipient of an 2014 Empowered Poet award from World Poetry. Elaine is a contributor to Shy: An Anthology, a winner of a silver medal IPPY (independent Book Publishers award) in 2014. Her art song collaboration with composer Daniel Marshall won a Boston Metro Opera festival prize in 2013. A contributor to V6A: Writing from Vancouver's Downtown Eastside, the book was a finalist for the City of Vancouver Book award in 2012.
Email ThisBlogThis!Share to TwitterShare to FacebookShare to Pinterest
Newer Post Older Post Home
Tweets by @acww