Screening Conversation of Boundary 也斯：東西 on May 8, 7.00pm 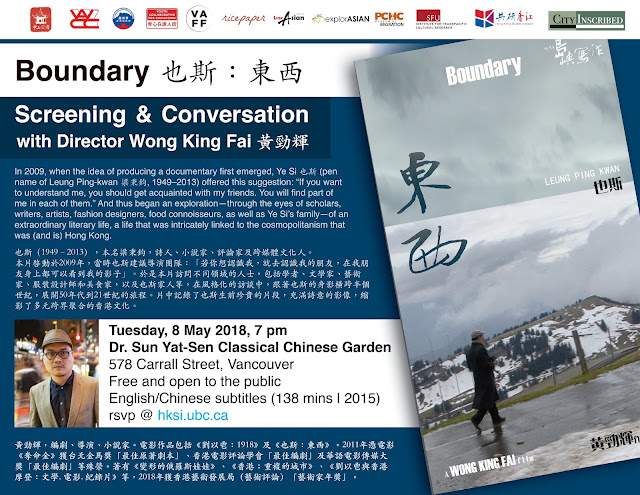 In 2009, when the idea of producing a documentary first emerged, Ye Si 也斯 (pen name of Leung Ping-kwan 梁秉鈞, 1949–2013) offered this suggestion: “If you want to understand me, you should get acquainted with my friends. You will find part of me in each of them.” And thus began an exploration—through the eyes of academics, writers, artists, fashion designers, food connoisseurs, as well as Ye Si’s family—of an extraordinary literary life, a journey that was intricately linked to the cosmopolitanism that was, and is, Hong Kong.

Dr. WONG King Fai is an award-winning film director, screenwriter, and novelist. He is the director of 1918 and Boundary, which document, respectively, the literary lives of Liu Yichang (1918–) and Ye Si (1949–2013), two of the most-celebrated writers of Hong Kong. Dr. Wong’s screenplay for the film Life without Principle (2011) has garnered a number of prestigious awards, including the Best Original Screenplay (the Taipei Golden Horse Film Festival and Awards), the Best Screenwriter (Hong Kong Film Critics Society Awards), and the Best Screenwriter (Chinese Film Media Awards). Dr. Wong has published two collections of short stories and is Chief Editor of the series “Literature and Cinema” (Hong Kong University Press). Dr. Wong has been named the 2018 Best Artist (Arts Criticism) by the Hong Kong Arts Development Council.