ACWW is proud to Support 1967/1997: Reflections on Hong Kong Literature and Cinema 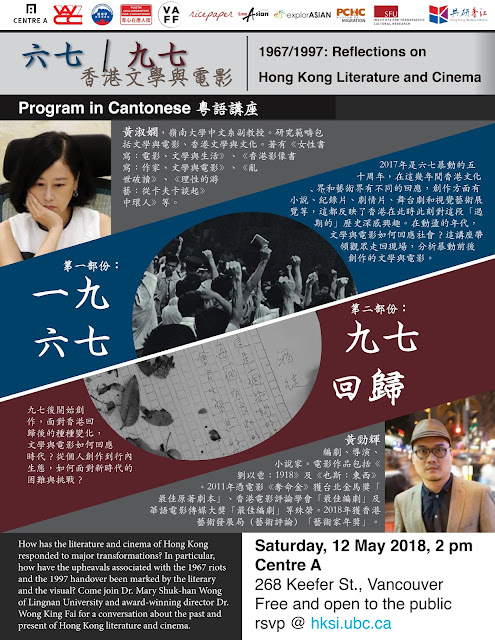 How has the literature and cinema of Hong Kong responded to major transformations? In particular, how have the upheavals associated with the 1967 riots and the 1997 handover been marked by the literary and the visual? Come join Dr. Mary Shuk-Han Wong of Lingnan University and award-winning director Dr. Wong King Fai for a conversation about the past and present of Hong Kong literature and cinema.

Dr. WONG King Fai is an award-winning film director, screenwriter, and novelist. He is the director of 1918 and Boundary, which document, respectively, the literary lives of Liu Yichang (1918–) and Ye Si (1949–2013), two of the most-celebrated writers of Hong Kong. Dr. Wong’s screenplay for the film Life without Principle (2011) has garnered a number of prestigious awards, including the Best Original Screenplay (the Taipei Golden Horse Film Festival and Awards), the Best Screenwriter (Hong Kong Film Critics Society Awards), and the Best Screenwriter (Chinese Film Media Awards). Dr. Wong has published two collections of short stories and is Chief Editor of the series “Literature and Cinema” (Hong Kong University Press). Dr. Wong has been named the 2018 Best Artist (Arts Criticism) by the Hong Kong Arts Development Council.
Email ThisBlogThis!Share to TwitterShare to FacebookShare to Pinterest
Newer Post Older Post Home
Tweets by @acww