Join Us for a Conversation, “History: The Diary of Dukesang Wong” at Word Vancouver Writers Festival 2021 on Saturday, September 11, 2021 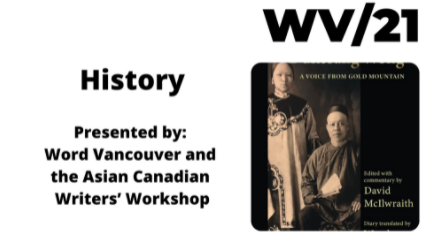 Presented by Word Vancouver and the Asian Canadian Writers’ Workshop (ACWW), this event is a conversation between ACWW President Todd Wong and David McIlwraith, editor of “The Diary of Dukesang Wong.” More than a keepsake but rather the documented history through many transitions, this diary is the only known written source of information about the life of a Chinese railway worker in the so-called “Gold Mountain,” as Western North America was optimistically called. This book allows us a glimpse into the past while highlighting how much or how little things have changed and how far we have to go.

David McIlwraith
David McIlwraith has been a writer, teacher, actor, and director. During a career in theatre, film, and television, he wrote and directed award-nominated documentaries and television programs, including Celesta Found, The Lynching of Louie Sam, In Chinatown, and Harrowsmith Country Life. He has worked across Canada in the development of new Canadian plays. As an actor, he has played roles from Romeo to Prospero, and he has taught at the University of Toronto and the University of Alberta. He spent a decade searching for and then researching this first-person account of the nineteenth-century Chinese experience in North America. He lives in Hamilton, Ontario, with his wife and daughter and spends summers with friends on Salt Spring Island.
Email ThisBlogThis!Share to TwitterShare to FacebookShare to Pinterest
Newer Post Older Post Home
Tweets by @acww