“After the End, Came the Beginning” and Presentation of the Jim Wong-Chu Emerging Writers’ Award at Word Vancouver Writers Festival on September 25, 2021 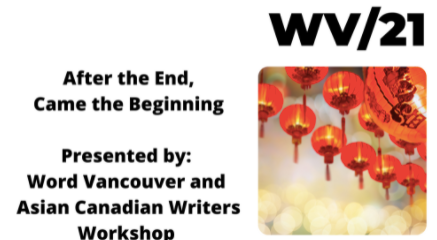 The Canadian literary scene once said to be void of diverse voices, has steadily seen a flourishing community of BIPOC writers in recent years. Asian Canadians, once marginalized and voiceless, have birthed a generation of writers who have influenced the literary establishment with celebrated works and garnered literary acclaim. Join this panel of authors who witnessed this amazing transformation and who are at different stages of their careers as writers, but whose stories internalize the interracial, intergenerational, and international stories of the Asian Canadian experience. Presented by Word Vancouver and the Asian Canadian Writers’ Workshop (ACWW), this event will also announce the winner of the Jim Wong-Chu Emerging Writers Award for 2021 and will celebrate the occasion with “Jim’s Special Menu” of classic Chinese Canadian cuisine.

Link to registration
Madeleine Thien
Madeleine Thien is the author of four books, most recently the novel Do Not Say We Have Nothing, which won the Giller Prize and the Governor-General’s Literary Award for Fiction. Her books have been shortlisted for the Booker Prize, The Women’s Prize for Fiction, and The Folio Prize, and translated into more than 25 languages. She teaches literature and writing at the City University of New York.
Ann Shin
Ann Shin is an award-winning writer and filmmaker who grew up on a farm in Langley, BC. She is the author of The Last Exiles published this Spring by Harper Collins, as well as a couple books of poetry including The Family China which won the Anne Green Award. Her documentary A.rtificial I.mmortality was selected as the Opening Night film for Hotdocs International Film Festival 2021. My Enemy, My Brother was nominated for an Emmy and a 2016 Academy Award. Her previous documentary, The Defector: Escape from North Korea won 7 awards including Best Documentary and Best Documentary Director at the 2014 Canadian Screen Academy Awards and an SXSW Interactive Award. Ann lives in Toronto with her partner, two daughters, and two cats. The Last Exiles is her first novel.
Jamie Chai Yun Liew
Jamie Chai Yun Liew (she/her) is a writer, lawyer, law professor, and podcaster. Her debut novel DANDELION will be published by Arsenal Pulp Press in the Spring of 2022. She is the recipient of the 2018 Asian Canadian Writers’ Workshop (ACWW) Jim Wong-Chu Emerging Writers Award. She advocates, writes, and researches on issues relating to migration, statelessness, and law. Her podcast, Migration Conversations, features experts and migrants who have experienced immigration systems up close. With Hakka, Hainanese, and Nyonya roots in Southeast Asia, one of Jamie’s pastimes is to cook and eat SE Asian hawker fare including laksa and char kuey teow. She lives in Ottawa with her family. Follow her on Twitter @thechaiyun and on Instagram @jcyliew.
Email ThisBlogThis!Share to TwitterShare to FacebookShare to Pinterest
Newer Post Older Post Home
Tweets by @acww